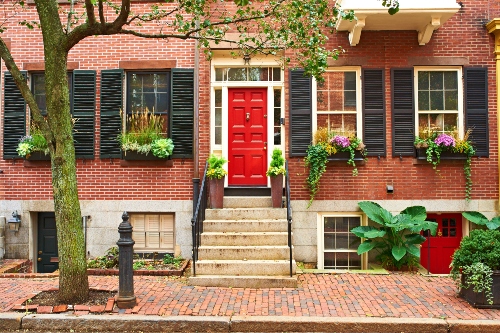 Each Boston neighborhood has its own unique story to tell. These beautiful neighborhoods are vibrant and rich in culture, history, and diversity. Explore everything that Boston has to offer in these distinctive neighborhoods.

The picturesque Back Bay neighborhood is centered around Copley Square. Here you'll find a variety of cultural festivals, farmer's markets, art galleries, unique shops, sidewalk cafes, and trendy restaurants. Beautiful brownstones line the residential streets and many historic monuments are along Commonwealth Avenue. Back Bay is also home to the John Hancock Tower, Boston’s biggest skyscraper. Other notable landmarks include the Boston Public Library, Trinity Church, and the Prudential Tower. Back Bay is well known for its vibrant culture and nightlife.

Learn more about Back Bay

Beacon Hill is one of Boston’s oldest neighborhoods and the hill on which the Massachusetts State House is located. Regarded as one of the most desirable neighborhoods to live in, the narrow cobblestone streets between federal-style row houses are illuminated by gas-lit street lamps, capturing the true essence of Americana. Acorn, one of Boston’s most photographed streets, provides a reminiscent glimpse into colonial life and some of the city’s most prestigious real estate. Restaurants, museums, monuments, and boutique shops are a few of the many reasons people come to the neighborhood. Beacon Hill is rich in history and some of the most significant landmarks in the United States.

Known as the birthplace of President John F. Kennedy, Brookline has a rich history. Just 6 miles outside of Boston, Brookline is part of the city’s metropolitan area. The residential neighborhood is considered a commuter suburb. Among the townhouses and beautiful properties are upscale businesses, fine dining, and traditional bars and pubs. Brookline has a distinct culture of professionals, artists, and students within its diverse community.

On the banks of Boston Harbor and Mystic River, Charlestown is Boston’s oldest neighborhood. Originally laid out in 1679, Charlestown is rich in history. The neighborhood has significant Irish-American influence, with many immigrants coming to Charlestown during the Great Irish Famine; this influence is still seen today with the neighborhood proudly embracing its “Townie” roots. Today, Charlestown is primarily a residential neighborhood with a very diverse population. Charlestown’s waterfront properties are known for their highly sought-after views of the Boston skyline. You'll also find a great selection of cafes and restaurants in the community.

Home of the famous Fenway Park, the home field of the Boston Red Sox, Fenway is a historic neighborhood in Boston. Aside from baseball, Fenway features several cultural institutions. The Museum of Fine Arts, Symphony Hall, and the country’s first public school, Boston Latin School are all located in Fenway. Young professionals and college students enjoy the colorful nightlife found at the clubs on Lansdowne Street. Fenway also offers some of the best restaurants in Boston.

Locally referred to as “JP”, Jamaica Plain is a vibrant neighborhood in Boston. The neighborhood consists of a diverse population and a strong sense of community. Jamaica Plain is popular among artists, college graduates, and activists. Footlight Club, the oldest community theater in the United States, is located in the neighborhood. The residential area houses many unique homes including townhouses, traditional rows, and even condominiums in the more recent years.

Bounded by Kneeland Street to the south, Essex Street to the north, Atlantic Avenue to the east, and Lincoln Street to the west, The Leather District is a unique neighborhood in Boston. Locally referred to as the “LD”, the aptly named neighborhood was once the center of the leather industry in the 19th century. Today, the small area of brick warehouses and historic architecture sits just outside of Boston’s Chinatown. The Leather District provides “loft-living” within its buildings that are popular among young professionals in the city.

Midtown is one of Boston’s newest neighborhoods. The emerging community refers to Boston’s core districts: the Financial District, Government Center, and Downtown Crossing. The neighborhood is highly desirable to reside in with its close proximity to prime retailers, trendy restaurants, entertainment and nightlife, and access to all four MBTA lines. Many of the high-rise residential buildings offer a variety of stunning views of Beantown and the neighborhood offers several Condominium structures as well. Whatever it is that brings you to Midtown, the neighborhood offers something for everyone.

Ten miles south of Boston, Milton is a suburb of the historic city. Located in Norfolk County, Milton is situated between the Neponset River and the Blue Hills. Once home to President George H.W Bush, Milton is rooted in U.S history. Once an agrarian and industrial community, Milton is now a more developed neighborhood with plenty of residential areas, though it still embraces its heritage. Those who reside in Milton enjoy the plethora of outdoor activities provided by the town’s land. For instance, Houghton’s Pond provides scenic views of its enriched waters in the Blue Hills Reservation year-round. Milton’s unique, semi-rural atmosphere provides a peaceful escape from the big city. Not too long of an escape, however, because Boston is only ever a few minutes away.

Along the narrow streets and some of Boston’s oldest architecture, the North End neighborhood, also known as Boston’s Little Italy, is rich in history and culture. The Italian-American immigrants who have inhabited Boston, have left their impression on the neighborhood. Italian restaurants, grocery stores, and bakeries are known for providing some of the best food in all of Boston. The North End is considered the city’s oldest residential area and houses historic buildings such as the Paul Revere House and the Old North Church. Other historic monuments include the Vermont Building and Copp’s Hill Terrace. Whether you are visiting or choose to stay forever, one simply cannot go to Boston’s North End without falling in love with the area.

Located in South Boston, Seaport is a fast-growing neighborhood that has been nicknamed the Innovation District. After a billion-dollar development project, Seaport has become one of the hottest markets in all of Boston for both residents and businesses. The commercial part of the neighborhood houses plenty of unique restaurants, shops, hotels, and a beautiful waterfront area. Seaport is highly-desirable to live in as those who reside there have access to a thriving community and are only a bridge away from Downtown Boston. Seaport’s modern atmosphere and all that it offers make it the perfect place for young professionals, students, and even those who are retired.

Commonly referred to as “Southie”, South Boston is a densely populated neighborhood with a strong sense of community, history, and tradition. South Boston contains Dorchester Heights, the setting in which George Washington forced British troops to flee during the American Revolutionary War, an event that is now celebrated in the city on “Evacuation Day”. Today, South Boston is a thriving, diverse community that embraces its working-class, Irish-American heritage. The famous St. Patrick’s Day Parade takes place in South Boston with anywhere from 10,000 to 20,000 participants. Though primarily residential, the area hosts many unique restaurants and shops to enjoy.

The historic neighborhood of Boston’s South End comprises 11 residential parks and some fabulous cafes, restaurants, and things to do. Listed on the National Register of Historic Places, the South End was once marshland behind Back Bay until construction began in the 1800s. The distinct Victorian architecture makes the South End unique from the rest of the city. The neighborhood is also very well known for its diverse community, being home to immigrants, families, and young professionals.

Boston’s Waterfront neighborhood is known as the pillar of the city’s contemporary culture. The popular destination houses seafood spots, marinas, and even the New England Aquarium. Though popular with tourists, Waterfront is an extremely desirable place to reside. Condos and apartments that overlook the beautiful Boston Harbor, access to downtown living, and miles of waterfront walkways provide a vibrant atmosphere to live in. Boston’s Waterfront is the perfect blend of tradition and modernity.