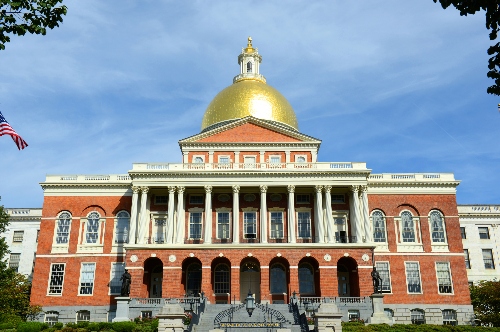 A walk along Acorn Street is an excellent beginning to your glimpse of colonial life in Beacon Hill. The federal-style row houses receive the warm glow of gas-lit street lamps as the cobblestone streets sing an understated rhythm underneath the slowly turning wheels of vehicles carefully traveling down the narrow street. A wide array of historical architecture has been lovingly preserved throughout the neighborhood. Some buildings have been repurposed as museums, while others are maintained as residences and enjoyed with modern amenities. There are many historic buildings and significant landmarks in Beacon Hill to explore and connect you to Boston’s proud history.

Beacon Hill Monument: The Beacon Hill Monument stands close by the Massachusetts State House on Bowdoin Street. The original tall wooden beacon was erected by settlers in 1635 on the highest hill. It served as an alarm system to warn the community of fire, attack, or any other unwelcome outbreak. Heavy winds took down the original beacon in 1789. Architect Charles Bulfinch designed the Doric brick column and gilded eagle monument in honor of the original wooden beacon. The current monument is a reproduction of Bulfinch’s original which was removed in 1811.

Massachusetts State House: Free walking tours of the state capitol building designed by Charles Bulfinch are offered weekdays from 10:00 am to 3:30 pm. The building’s cornerstone was placed by Samuel Adams in 1795 and completed in 1798. The wooden dome was covered in copper by Paul Revere’s company in 1802, to keep the rain at bay.

Boston African American Historic Site: Beacon Hill was home to many nineteenth century working and middle class families, including many free African Americans. The collective community became leaders in the fight against slavery and played an integral part in the Abolition Movement and the Underground Railroad. The site references fifteen historically significant buildings built before the American Civil War.

Black Heritage Trail: This 1.6 mile walking trail, part of the Boston African American Historic Site, begins at the Robert Gould Shaw & Massachusetts 54th Regiment Memorial and explores ten sites ending at The African Meeting House (the oldest surviving black church in the country from 1806) or The Abiel Smith School (an 1835 African American public school) which now serves as the Museum of African American History. You can alternately choose to begin and end at any of the sites. The free walking tour can be explored independently or arrangements can be made to join a walk led by a park ranger with an additional program.

Boston Common: This is America’s oldest park. It was founded in 1634. It has served as a cornerstone for public speeches, anti-slavery meetings, civil rights rallies, military celebrations, military protests, and military recruitments. The park is currently enjoyed as a green recreational space by the community. The frog pond freezes over in the winter to be enjoyed by ice skaters young and old.

Public Garden: This is America’s oldest public botanical garden. The garden features well over eighty species of plants in a Victorian setting with walkways, monuments, fountains, and a lagoon for you to enjoy the grounds. The garden provides a leisurely interlude from daily concerns as visitors stroll through the rich and unusual plants and float in swan boats on the lagoon, while reflective in graceful thought. The Public Garden map includes the location of forty notable trees for you to visit and consider.

Boston Athenæum: The Boston Athenæum was established in 1807. It is a membership library, where members pay an annual fee to use the library's services. Day passes are also available for purchase. It has enjoyed a rich history of acquiring books, art & artifacts leading to the opening of an art gallery in 1827. “The mission of the Boston Athenæum is to engage all who seek knowledge by making accessible our library’s collections and spaces, thereby inspiring reflection, discourse, creative expression, and joy.” Art and architecture tours are offered on Mondays and again Wednesdays through Saturdays. The tours are open to the public for a small fee.

Remmes & Company is Boston’s premier real estate team. We look forward to helping you find your perfect home in the Beacon Hill neighborhood or one of the other many fine upscale Boston neighborhoods we serve. Contact us today!